I’m currently relocating, and moving my workshop so I haven’t started on any big projects recently. However I’ve spent a little bit of time doing some refurbishments, and small gifts.

Above are a few antler handled knifes made with some scrap 1.2mm spring steel left over from armour projects. I made them as part of a blacksmithing display at the Armistice remembrance down in Cambridge. They’ve had some designs quickly acid etched into them. They also have differential tempering for different parts of the blade.

The odd one out is a knife I was asked to chuck some scales on. It was quite hefty, more a display knife, so I used some polished up buffalo horn with countersunk rivets.

Most of my repairs and refurbishments, I don’t usually take pictures of, since often I don’t know the original craftsmen and can’t credit them. Below are a few exceptions, where I’ve used plates from a Master Uley (I think) khatanga skirt, and reused them on  the inside of a brigandine cuisse. In the picture, the project is still under way. 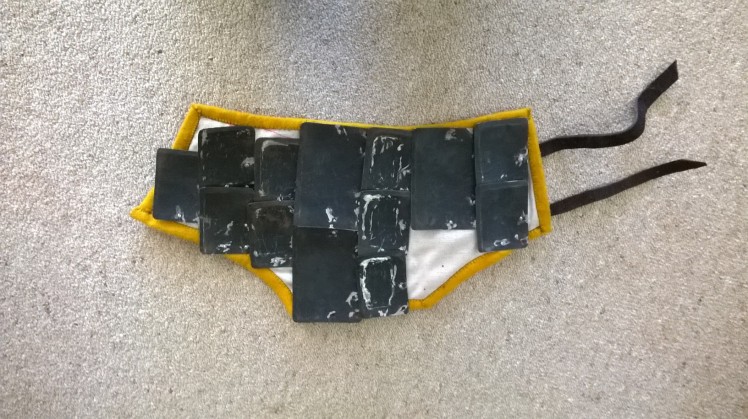 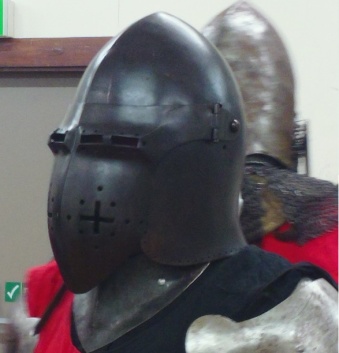 The helmet, I’m not sure who made it, but I stripped the chipped paint off it, and recoloured via a rather magical chemical method which is far more chip resistant. I managed to alarm the customer by sending a photo of the helm part way through the process, when it happened to be a rather pink colour…

If anyone knows who made the helmet, let me know so I can credit them.